Here is the ULTIMATE summer dessert. No need to turn the oven on to create this epic dessert. This Vegan Ice Cream Cake is decadent, creamy central, pure bliss and the perfect treat for any summer celebration! This vegan cake has LAYERS and each layer is very much necessary in creating this dessert. There is the cookie crumble base, which adds a crunch and a salty sweetness. Then there are two layers of chocolate fudge. One layer on top of the cookie base and then one on top of the ice cream layer. The ice cream layer is obviously the star of this dessert and will alter the overall flavour of the gluten free ice cream cake. If you choose coffee (as I did)- you get a coffee-flavoured cake. But you could also use vanilla and the cake would be just as amazing! The final layer of this vegan ice cream cake is a little sprinkle of the cookie base layer on top of the last fudge layer to balance the cake to perfection. If your mouth isn’t watering yet- ice cream cake isn’t for you.

How To Make A Vegan Ice Cream Cake

I think it’s safe to say most of us grew up with Dairy Queen ice cream cakes at birthday parties. They were the dessert every kid wanted at their parties. Well, friends, there is a new badass ice cream cake in town and it’s this vegan ice cream cake.

Many moons ago my mom used to make a homemade ice cream cake for family birthdays. It wasn’t vegan or gluten-free but a few months ago, I found myself dreaming about that cake and knew I needed to recreate it. It was very special having Mom in town when I did recreate the ice cream cake so she could try it. And she loved it! She’s also a huge coffee fan so anything coffee is usually going to vibe perfectly with her. I will say Adam and I had a good chuckle because she decided to eat this gluten free ice cream cake sans fork! Mom ate it more like an ice cream sandwich. It was pretty adorable and it actually kinda worked! It just got a little messier than if you enjoyed it with a fork- but who cares?!

So eat this vegan ice cream cake however you want, with a fork, with a spoon, or with your fingers- it all tastes the same and it all tastes amazing. This mouthwatering gluten free ice cream cake is bound to put smiles on the faces of anyone who bites into it- which makes it a great cake to make for any celebration. 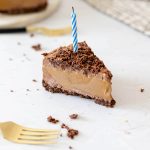