Hello to the thickest, smoothest, and creamiest vegan buttercream recipe. This vegan frosting is so simple to make and only uses 4 ingredients. Top your brownies, cupcakes, or cakes with this vegan icing and it will truly take any dessert to the next level. Nowadays vegan butter is in most major grocery stores which makes whipping vegan icing up quite easy! I’ve made this recipe a light vegan chocolate frosting but you can easily leave the cocoa out and keep it straight vanilla! Either way, this vegan buttercream is an absolute must the next time you make your fav baked good.

Why You’ll Love This Vegan Frosting

What Is Vegan Butter?

There are a ton of vegan butter options in grocery stores nowadays. My go-to’s are Becel and Miyoko’s. Becel’s is what was used originally in this vegan buttercream recipe. It is more affordable than the latter and made with different types of oil. Miyoko’s is made with oils and uses cashews in their recipe (so not nut free). It uses cleaner ingredients but it is more expensive. All types of vegan butter are great alternatives to dairy butter, they add a creamy addition to meals and baked goods and make for the heavenly creaminess in this easy vegan buttercream.

How To Make Vegan Buttercream

Making vegan buttercream is so easy because you only need 4 ingredients. Add the butter to a large bowl and using an electric hand mixer or a stand mixer cream the butter. It is important the butter is at room temperature. Next, add the sifted icing sugar 1/2 cup at a time. Sifting is important to remove any clumps. Once the icing sugar has been added and mixed in, add the vanilla and sifted cocoa powder. Mix the vegan buttercream until pillowy soft. The buttercream should be thick and stand by itself. If it is too thick add 1-2 tbsp of plant milk.

Try These Other Vegan Desserts

This vegan buttercream frosting is so fricken delicious and will truly make any baked good just a little more fun! This vegan buttercream is thick, slightly airy, and really hard not to eat by the spoonful! Try it on your next batch of brownies, or the next birthday cake you make. It will take any dessert to the next level. Truly. Use your favourite vegan butter to mix into the most epic vegan frosting. This vegan icing is bound to become a staple for any celebration. 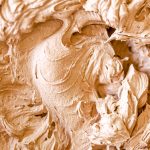