I’ve just created the most dreamy Gluten Free Chocolate Cupcakes with a vegan buttercream frosting. These dairy free cupcakes are simple to make and are the perfect way to celebrate birthdays, Valentine’s Day or just an average day with! They are super moist, fluffy and balanced out with a smooth, silky vegan buttercream. You can’t go wrong making these.

Here is the dealio on how to make these dreamy gluten free chocolate cupcakes:

Ok so as you can see these gluten free cupcakes are actually quite simple to make. As long as you have all the right ingredients you are golden! You will be rewarded with 8 uber fluffy and decadent dairy free cupcakes.

HOW TO MAKE VEGAN BUTTERCREAM FROSTING

I suggest using the vegan becel butter or Miyoko’s vegan butter for the icing as this is what I’ve tested it with.

HOW TO PIPE WITH VEGAN BUTTERCREAM

Now, this is the tricky part and is not my specialty, but I’ll tell you what I know. Piping. Mad respect for professional cake decorations because it is HARD to make them look nice. But here is what I learned:

These gluten free chocolate cupcakes are so simple to make, I’m kicking myself for not testing a recipe before now! The texture is so good, just like a regular cupcake. It’s so soft and fluffy and the vegan buttercream on top just takes these dairy free cupcakes to the NEXT LEVEL. They are absolutely epic and the perfect vegan dessert for Valentine’s Day, or birthday parties! Treat yourself with these heavenly gluten free chocolate cupcakes. 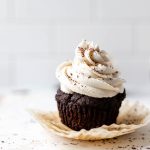