I’ve CRACKED the code with these vegan carrot cake cupcakes. And it took a long-ass time. But I did it and I hope you try these gluten free cupcakes out. The texture is on point. It isn’t gummy or dry. It’s moist and slightly crumbly (but in a good way). The gluten free flours used are almond flour, oat flour and brown rice flour, which seem to always be my go-to. They don’t leave a weird flavour or texture. These carrot cake cupcakes are topped with a vegan cream cheese frosting that had me licking the bowl (honestly). If you are looking to spruce up your Easter dessert, then these vegan carrot cake cupcakes are it!

How To Make Gluten Free Cupcakes

Although testing these gluten free carrot cake cupcakes was quite the process for me, it won’t be for you, because I did the hard work for you!! Start by preparing those flax eggs and melting the coconut oil. Then in a clean bowl, add all the dry ingredients together and whisk. Set it aside and add the flax egg, coconut oil, vanilla, milk, maple syrup and apple sauce together and whisk. The flax eggs and apple sauce act as the binding agents in these vegan cupcakes. Add the wet to the dry and mix until it’s JUST combined.

Then fold in the carrots. A little fun fact about the carrots: if you don’t peel them, the skins will turn green when cooked, so these cupcakes will have little green specks in them . It doesn’t alter the taste of the cupcakes just the look. So if you care, just make sure you peel those carrots.

This recipe makes 12 vegan carrot cake cupcakes and they need to bake for 26-28 minutes in a 350ºF oven. It’s important to let the vegan carrot cake cupcakes cool for 10 minutes in the pan when they come out of the oven. They will still be slightly soft but when you press down on the top, your finger imprint won’t stay. After 10 minutes, move the cupcakes to a cooling rack and let them cool completely before you add the frosting.

The vegan cream cheese frosting is simple to make but you do need hand beaters or a kitchen aid. Simply add the cream cheese, butter and sifted powdered sugar (so there are no clumps) together and whisk until it’s thick but smooth! You don’t want to skip this frosting because it is the perfect pairing with these gluten free carrot cake cupcakes.

How Many Times Did I Test These Vegan Carrot Cake Cupcakes?

So my process with these vegan carrot cake cupcakes started probably five weeks ago. I knew I wanted to create a cupcake recipe for Easter preferably carrot cake-themed which I thought would be easy after I recently made these epic chocolate cupcakes. I thought I would be able to use the same flour combinations, but I was wrong. Why couldn’t I just sub out the cocoa powder for more of another flour?!

The first test for these vegan carrot cake cupcakes was a huge flop with the inside of the cupcakes left raw on the inside. So I did more research and tested a version with mostly an oat flour base. The texture was way better, BUT they were super dense. So back to the drawing board. Then I tried just an all-purpose gluten free flour blend. I typically stay away from store-bought all purpose blends cause I don’t like the taste they usually produce. To me using a gluten free all-purpose flour blend makes recipes “taste” gluten free. And my goal is to produce amazing desserts that are gluten free but don’t taste gluten free.

and so it continued

The all-purpose flour (surprise, surprise) had a gummy texture and I was not a fan of the taste. So the testing continued. Gluten free flours are a fickle thing and I am still learning. I am no pro, but slowly I’ve been able to understand what typically works and what doesn’t. When you add the vegan element to gluten free baking it complicates it even further.

So all this testing for these vegan cupcakes continued for 5 weeks. I also tested some gluten free and vegan carrot cake cupcake recipes from other bloggers and to be honest, they didn’t turn out. They were super dense. Adam watched me struggle and saw the frustrations build. He also tasted all 9 million versions I tested. And he agrees that THIS final recipe truly is the best! Needless to say, after SO MANY FRICKEN tests the end result isn’t gummy, dense, or gross. It’s the opposite, like a cupcake (gluten free or not) should be.

For More Vegan Easter Recipes, Check These Out

Thank goodness you don’t have to test this recipe for these vegan carrot cake cupcakes a bunch of times to know you will get a good result. I did it for you and I’m thrilled with how they turned out. Super moist, perfectly spiced and sweetened vegan carrot cake cupcakes. Gluten free baking definitely has it’s many ups and downs but when you find a recipe that you can come back to time and time again, you know all the fails were totally worth it to get you where you are now. These vegan cupcakes are going to be the best addition to your upcoming Easter feast. Just do yourself a favour and make these bad boys. 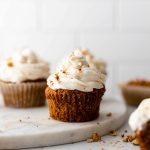